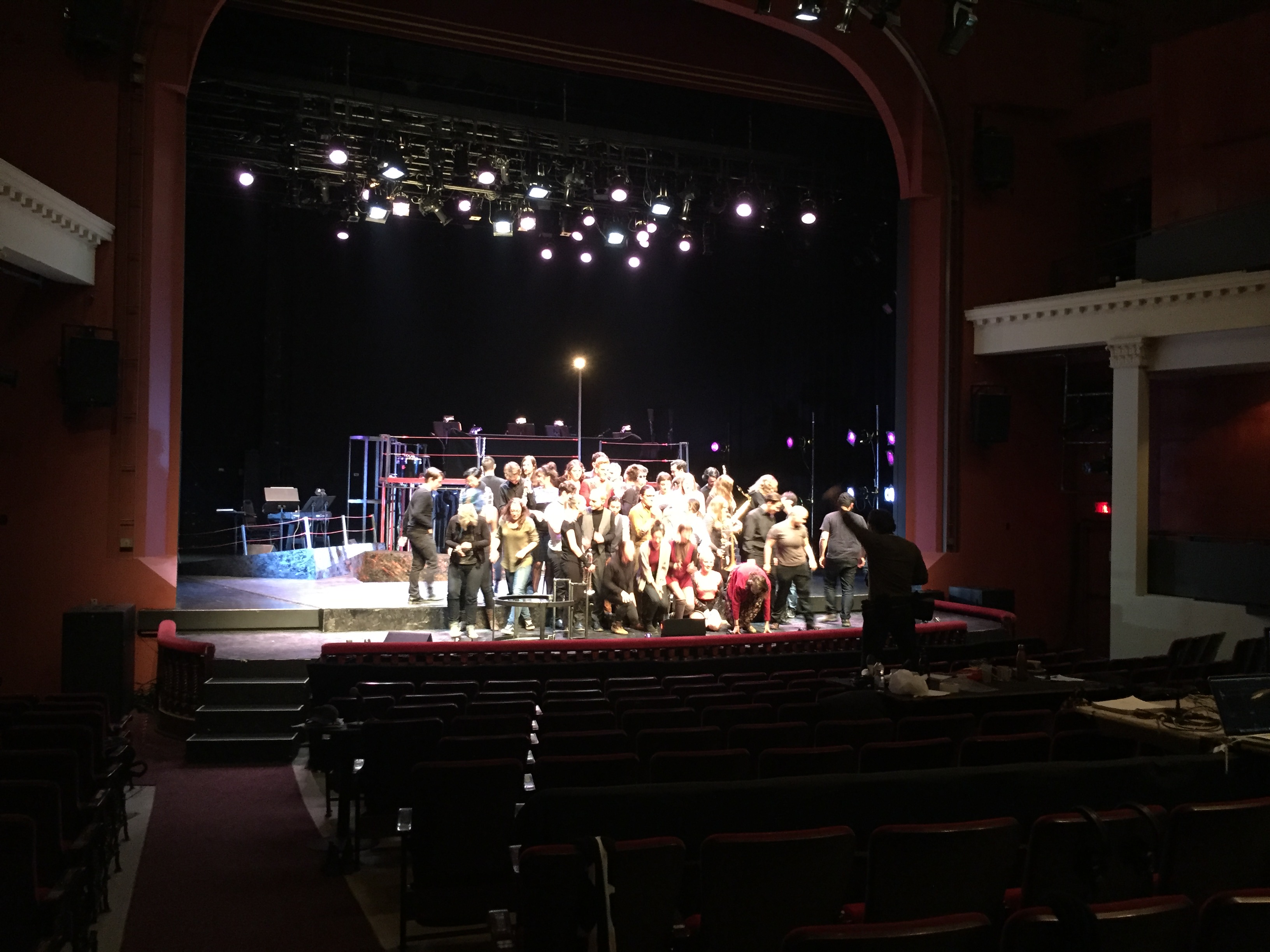 Highlights - a few of my favourite projects

Performed live with EMG, EKG, EEG, motion capture all to OSC and live video, with this excerpt featuring myself on live guitar to laser lissajous projection. Movement by Julia Aplin, text/dialogue Anna Chatterton and media design by Jim Ruxton.

Orphée + for Against the Grain Opera

Working with director Joel Ivany, we worked to create a really modern and cool version of Berlioz' Orphée and Euridice.

Inspired by 'Sleep', we added in a youtube chorus in a few sections. Where we created sing along videos, got submissions from singers around the world and mixed them together to create a video and recorded chorus. We tried various sync options, including video that could be adjusted to tempo but ended up adding a click track for the conductor for tempo.

To fire the video I suggested that a keyboard player would be the most trustworthy, so we added a keyboard player to the pit. Once we had keys, we realized we could add some sound effects and keyboard sounds to the orchestration. Working with Joel and the conductor I built a mainstage rig and programmed a series of sounds that worked with the band. While we added keys I suggested we replace the harp with electric guitar, as that could cover the harp parts and also beef up the sound.


We took all these ideas out to Banff for a workshop, where I played some guitar, we added in keyboard parts, tested out video recording and worked out a plan. After this, I worked with the arranger they hired to figure out the best guitar parts, effects and sound notations, added in keyboard parts and patch changes and finally, as a last step, we realized that the 3 youtube chorus/video sections were only about a quarter of the chorus sections. To cover this, we hired a small chorus and recorded the remaining chorus sections, word by word. I then took those choruses and turned them into sample banks, where the keyboard player played chromatically up the keyboard which played the chorus back word for word, so it could be played in time.

The show was a big hit, 12 Dora Mavor Moore award nominations and 5 wins and was a total artistic success.

With co-composer/sound designer Suba Sankaran we are working with director Ravi Jain to create a 2 night version of the epic Mahabharata. We're working with an amazing band for the the first half, creating and performing live for the shows with the second night to be recorded, including a 13 minute operetta in Sanskrit. Stylistically the play and music move through a series of styles and forms, from very trad Indian up to a more modern take of the story towards the end. We've been fortunate to work have had a few workshops though we were stalled by Covid.

Suba and I worked with the band live, through a few workshops.
With Ed Hanley on tabla, Gurtej Hunjan on percussion, Hasheel Lodhia on voice and bansuri, Suba on voice and percussion, Dylan Bell on bass and keys and myself on guitars we worked with the actors as they developed the blocking. The Indian tradition is an aural tradition, with musicians with amazing memories. So we don't use charts, but notes as everyone picks up and creates so quickly. We can all improvise together than through a bit of working, coming up with themes and editing we can create music as the action is created in the hall. Its such a rewarding experience with such a great band and cast.
In the second night of the performance we will use recorded music. Suba and I have been creating material offline and then editing it in rehearsal to work with the show. But there is one 13 minute long operetta that we are working on for the Bagdad Ghita section of the piece. A full 13 minute operetta written entirely in Sanskrit with the aid of translation. It'll be sung by the lovely Meher Pavri. Below is a little video excerpt from a workshop for the operetta.

Bhagavad Gita Opera (Workshop) - Mahabharata from Why Not Theatre on Vimeo.

A site specific Binaural audio series of works
Working with 5 young authors we workshopped and created 5 short site specific audio dramas which we then recorded using my Binaural Dummy Head microphone. Binaural sound being a stereo recording that uses a microphone that mimics the way humans hear spatialization through a physical representation of the human head. Its a dummy head with mics in the ear canals about where our ear drums sit. it was a really interesting process, where I learned so much about how much you can edit and how to record in binauaral sound to create that incredibly magic 3D surround sound. Its the only way I've heard of recording a sound that will make you turn your head around because you're sure its behind you.

I was hired on as sound designer with Dash Arts production of 1001 Nights for Luminato. With Director Timothy Supple I worked with the all Arabic cast in Fez, Moroco. This was such a wild and beautiful artistic team, fresh on the heels of protests in Tahrir Square and the Arab Spring movement. Having studied a bit of Arabic music I knew some of the musicians teachers and could help them make sure they and the actors sounded as good as possible.

One Thousand and One Nights Promo Trailer from Dash Arts on Vimeo.

War of the Worlds - Art of Time Live Foley

I performed live doing foley using all period typical foley props to recreate a version of the War of the World's radio drama. This involved researching when slinkies were made, what vinyl recordings were used and pressing my own master vinyl sound effects record. I rehearsed with the band and under the Andrew Burashko's leadership created a live solo foley version of the radio show performed live with band and 3 actors. The crowning glory for me was having an 80 year old CBC 'sound effects technician' come out and see the show as our guest and then compare stories about how he created similar effects during the time.
Read More Show Less