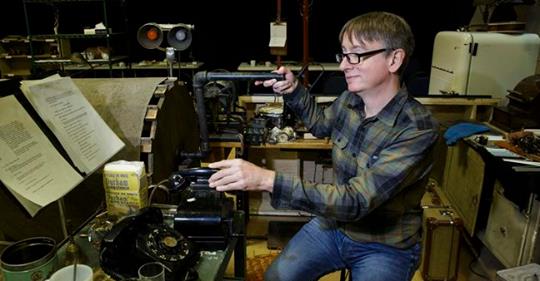 Jack Foley is credited with starting the art of Foley, or live sound effects, in 1927 for film. Today foley is still used in radio, though the decline of the radio drama up here and elsewhere as well as prevalence of recorded sound effect libraries has cut down that work significantly. For film, the foley artist has been relegated to sounds that are hard to do with libraries and faster to do as a performance and not useable from the sound recordings when they were filming. So foley artists today do a lot of footsteps, cloth sounds, glasses and close items. They’ll be sent a copy of the film to work on and send back a protools session where they’ve laid down a series of takes, each with its own sound. It’ll be a track of one characters footsteps, another track for the next, maybe a couple of tracks for cloth movement and the keys or whatever sounds are requested by the editor/director.

Foley in live theatre is a different beast. Instead of working on one sound and perfecting it, it becomes the foley artists job to do as many as possible as well as possible. The emphasis becomes almost visual. For Canstage’s Its a Wonderful Life, staged as a 1940’s era radio play, the foley became the visual element to the show, as the sound effects and their performance was physically more active then actors reading from scripts in front of a microphone. The challenge was to do the job of what was originally 4 foley artists as one person and to make all the materials and junk as period as possible.


For the Art of Times War of the World, the job is to find a way to recreate the sounds and add a bit more, from the original radio play, again in a period manner. Finding sounds for death rays and Martian space ships was a challenge and a joy.


In other shows I’ve tried to incorporate more live sound effects whenever possible. For Soulpepper’s Who’s Afraid of Virginia Woolf, we built a pneumatic crash box, to crash glass and have it sound real and close to the action. For Theatre Smash’s production of The Ugly One we had an actor do live foley for a plastic surgery scene that was faked with office supplies. The sounds, however were made largely with food and made a comic staging more dramatic and shocking. We made some rather disgusting internal organ squishing sounds with flubber.